Peace in the Holy Land: the Potential for Peace of “al Haram ash Sharif”, the Temple Mount in Jerusalem

Gottfried Hutter, Theologian, Psychotherapist, Author of this Peace Initiative, Founder and Chairman of the Temple-Project Association 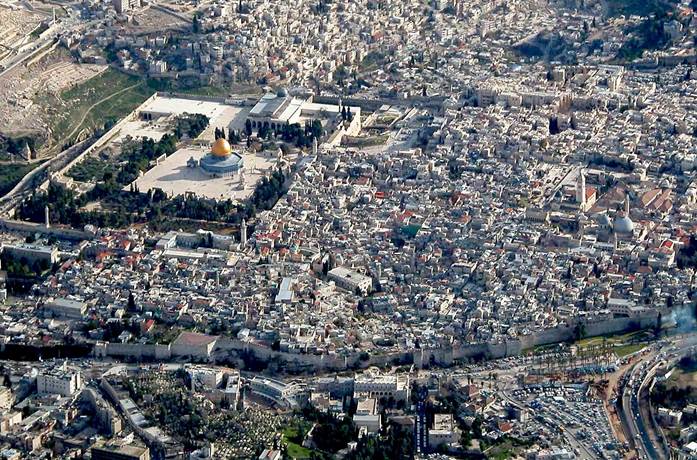 The Temple Mount, the Noble Sanctuary divides hearts and minds. Because of radically opposing claims, this holy place has become a symbol of conflict.

Both Jews and Muslims believe their claims to be superior, both see their claims questioned, and so both feel threatened and react accordingly, all too often violently. And quite a few are already warning that this conflict could get out of hand and turn into an all-engulfing religious war – unless a solution can be found in time.

Both orthodox and liberal Jews believe they can calm down overheated emotions by insisting that they have no intention of touching the Temple Mount, because only the Messiah can bring a New Temple; but that does not clarify the question of whether Jews might still have rights here and now in regard to the Temple Mount.

The Chief Rabbinate has decreed that Jews are not permitted to enter the Temple Mount, since they might inadvertently step on and thereby desecrate the location of the former Holy of Holies. But even that command upholds the Jewish claim of prior rights. The same is true of the Israeli government’s assertions that there is no intention to change the site’s status quo.

To Muslims all these statements may appear as obfuscations of the principal Jewish claim to ownership – and as a sign of massive self-doubt.

Consequently, Muslims have tried to create a solution of their own by stating that the Jewish claims are entirely fictitious, because there never had been a Jewish Temple at this location. While that narrative may be an understandable response to the Jewish statements it cannot, however, undo the entire Jewish and Christian historiography which has consistently recorded this location as the site of the Jewish Temple.

That said, the contradictory claims lead inescapably to a grave question that must be answered by both Jews and Muslims, and even by Christians: Jews must ask themselves how – in the light of the historic gap of nearly two thousand years – they can still assert any claim to the Temple Mount. And Muslims must ask themselves if their claim of exclusivity may not have violated Jewish rights from the outset.

Muslims may forgive me for asking this – it is not my question, it was two young, theologically highly educated Muslims who put this question to me, to my utter astonishment. Of all places on Earth, they said, had this not been the most significant one to the Jews, even after it had been taken from them by the Romans? For Muslims, Judaism deserved and deserves respect, because it is the first religion of the book; and for this reason the site of their former Temple even marked the first direction of Muslim prayer. How could the Caliph Omar only a few years later ignore all these factors and the longing of the Jews for their most holy place?

In my view, I told these young Muslims, the Caliph Omar could do so only because he knew of the Prophet’s famous “Night-Journey”. One night, it is said, the Archangel Gabriel took him to the Temple Mount in Jerusalem and from there up to Heaven, to meet with all the prophets who had come before him – thus certifying Mohammed as the Seal of the Prophets. This was unquestionably the motive of the Caliph at the time – but does it not show us today a clear acknowledgement of the original spiritual significance of the site, one that implies rights for the Jews even today?

The fact remains that the entire Temple Mount did become the exclusively Muslim “al Haram ash Sharif”, “the Noble Sanctuary”, and has served as such for over 1300 years. – And during all that time there has not been one single serious attempt to reestablish a Jewish Temple.

Yet it is no less a fact that Jews have continuously cherished the remembrance of their Temple – and some of them, at least during the pre-Islamic period, went there once a year in order to gather around a certain rock, which signified the location of the Holy of Holies of their Temple.

Today, according to Muslim tradition as well as according to international law, the Noble Sanctuary is indisputably a purely Muslim domain.

Many Muslims only concede that Jews may pray at the Western Wall of the one and indivisible Muslim sanctuary.

But since 1967 the Israeli government has claimed ownership over the entire Temple Mount – while leaving its administration (in their view voluntarily) in the hands of the Muslim religious endowment, which has been entrusted with the Noble Sanctuary since the days of Caliph Omar, and – pursuant to the peace treaty with Jordan – this responsibility is exercised by the Jordanian Ministry of Religion.

Needless to say, most Muslims reject the Israeli claim of ownership.

Under such circumstances, is a solution to this conflict even conceivable?

In the past when Muslims incontestably ruled the entire Middle East, Muslim law, the Sharia guaranteed peace among the religions – by ordering that all non-Muslims see themselves as dhimmis, protégés, subordinated under Islamic sovereignty.

By the time the Caliphate came to an end in 1924, ancient systems of law had ceased to be self-evident – even where, as in this instance, they had been able to guarantee peace for over a thousand years. The entire world was divided anew, more on the basis of geographical and geometrical considerations than according to criteria of collective or personal identity or the traditional rights of the people living in a given place.

With that development, Islamic law was levered out and replaced by international law. And in the interim period a State was implanted in the area, one for which Jews had longed for two thousand years – without any chance of realizing their dream.

But now, in the territory of the losers of World War I, Jews were able to reconnect, even geographically, with their ancient history.

When the unique historic opportunity arose, they seized it, albeit founding their State with a new, secular vision.

For two thousand years this people had preserved their culture, even while scattered all over the world. Many of them found a home for themselves in the new State of Israel. To live now in this territory was quite different from living there under Sharia law, for now they were able to live under their own law.

Some Israelis started to dream of the days of the powerful kings David and Solomon. All developed a new identity.

And thus, two powerful collective identities came into conflict with one another, the Muslim identity and the new Jewish-Israeli identity.

Because all these things have taken place in a region which gave birth not only to the Jewish culture, but also to the Muslim culture, a critical mass began to build up within both cultures, each inspired by the urge to demonstrate its superiority.

Must this lead inevitably to the long foretold “Armageddon”? Or could there be another solution based on reconciliation, one in which both sides would come out as winners? Could the final state not be one of “unity in diversity”? Could the solution to this perilous and seemingly insoluble puzzle not be found in Sura 5,48 of the Qur’an, which expressly states that if God had wanted to, he could have given only one religion to all of mankind, but that he preferred to see “a competition in virtue” between the religions?

Could wise leaders on both sides therefore not see that the return of Israel does not have to be a threat to Muslims, but that it could become an enrichment? Could a wise Israeli leadership not follow the path Israel’s Patriarch and name-giver Jacob/Israel once followed in his reconciliation with his brother? – Could they not honor their Muslim brothers and sisters by esteeming them and their religion as the fulfillment of Biblical prophecy, a gift from God?

Could the three religions not then regard themselves as diverse protégés of the Covenant which God has offered to all mankind?

And could not all these people then come from all over the world to Jerusalem, as the prophets predicted, to express their gratitude to God, rejoicing in and honoring their brothers and sisters who have received other forms of God’s Covenant?