Peace in the Holy Land

Why has the Israeli-Arab conflict not been solved decades ago? Because none of the proposed cures matched the disease. The cures were purely secular, but the problem goes much deeper. It is rooted in identities thousands of years old. 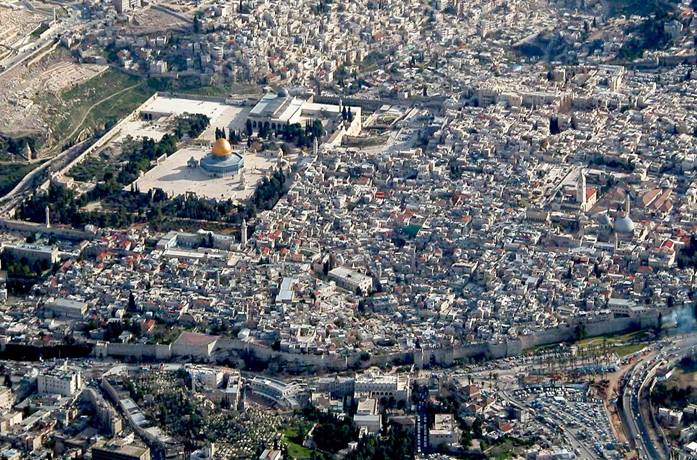 Ever since the Jewish Temple was destroyed by the Romans, at least orthodox Jews have yearned for a New Temple in Jerusalem. But for 1900 years no opportunity opened up. First the Romans barred Jews from entering their “Promised Land”, then Muslims laid claim to the place.

No one could have imagined that Jews would ever return to their Biblical homeland. But that is precisely what began to take place in the 18th century. And in 1967 Jews even re-conquered their former Temple Mount, which has, for more than 1300 years now, been the Muslims’ “al-Haram ash-Sharif”, the Dome of the Rock and Al Aqsa! The Israeli government protected the Muslim sanctuaries but they now claimed ownership over that piece of land – a highly symbolic act.

Disregarding that symbolism, President Clinton urged the Israelis in Oslo, among many other things, to give up their newly gained control of the Temple Mount as part of a compromise for peace. The results were catastrophic: Prime Minister Yitzhak Rabin was murdered; and when one of his successors, Ariel Sharon, went up onto the Mount, a new Intifada broke out, following which Israel built a huge wall across the country. The world was stunned, but couldn’t see the logic in the sequence of events.

Unfortunately, our Western world view comprises a huge blind spot. Our remedies don’t work, yet our narrow, purely secular concepts make it almost impossible for us to perceive in all their complexity the diverse layers of truth involved: how the Middle East conflict is about far more than just land, how it is at least as much about identities, about emotions and issues of religious superiority.

How, then, can peace be reached?

For a start, we shall need to take things as they now stand. That means, first and foremost, seeing the eminent symbolic significance of the Temple Mount for both Jews and Muslims.

At present, the necessary mutual respect is missing; this counters any wholesome feeling people may have towards one another and runs profoundly counter to the spirit of the Abrahamic religions. But just blaming ultra-orthodox radicals will not help.

True peace arises from the power of empathy. In order to be able to feel the full meaning of the site for the other, both sides will need to undertake plenty of exercises in deep empathy – and in this they will need the whole world to support them. The result will be unity in diversity. On that basis true and lasting peace will be possible.

An open letter from the high representatives of Islam to the Pope [“One Common Word”] gives hope because the one common word is “love”.

That said, once the United States and the European Union put all their political weight behind the undertaking of demanding inter-religious empathy from both sides, the time-frame to accomplish it may be as small as the time-frame it took to establish French-German friendship after WW II.